Just outside Rome’s city limits on its eastern periphery is the Zona IX Acqua Vergine– the ninth area of the L’Agro Romano. Also known as the Ager Romanus, ‘the field of Rome’ is a traditionally agricultural area that extends around the urban perimeter of the city. This region is now characterized by a patchy hybrid of conventional agriculture with industrial and residential development. Amidst this milieu in a tributary of the Aniene River is a natural spring, the source of the Acqua Vergine– the only remaining functional infrastructure from a legacy of Ancient Roman aqueducts.

This water brought to the city by the Acqua Vergine is enabled by a geologic condition: a large area of highly permeable volcanic deposits from the Alban hills that covers the Southeastern part of L’Agro Romano (La Vigna et al, 2016). This geologic complex holds Rome’s regional aquifer, one of the most important aquifers in Italy, which underlies the urban sprawl that makes up the periphery of the city. 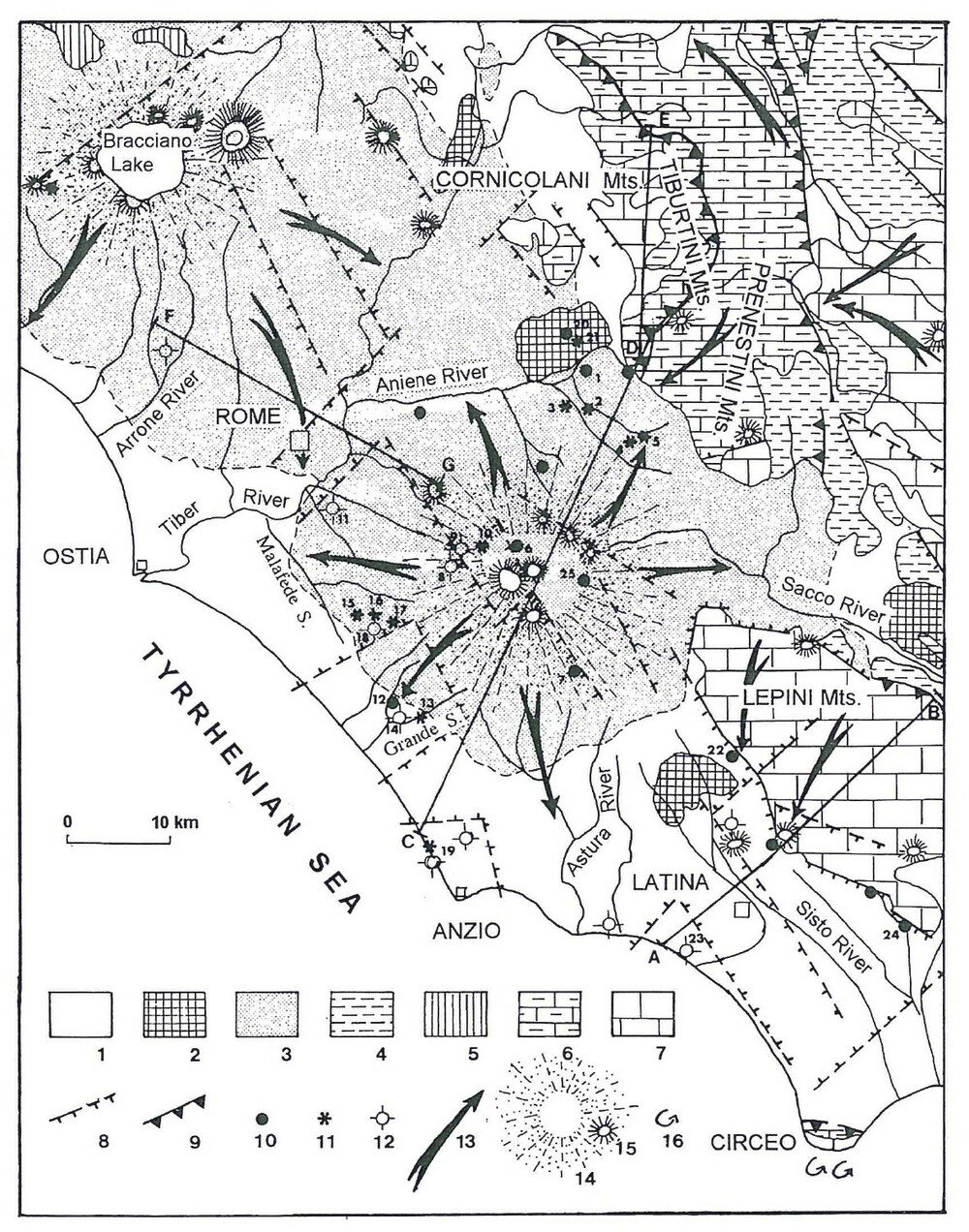 Despite the summer drought typical of a Mediterranean climate, Rome has traditionally been characterized by its abundance and celebration of water. This paradox was originally enabled by an extensive Imperial network of aqueducts that bring water from aquifers at higher elevations, fed by precipitation in the Apennine range. Today, Rome’s water supply still relies on piping water from sources such as Lake Bracciano and the Alban Hills, drawing on the regional aquifers. However, this infrastructural system on which the city relies is literally full of holes. Recent estimates suggest that over 40% of water intended to reach Rome is lost in transport, due to leaks, evaporation, and unpermitted siphoning (Heggie, 2020). In a severe summer drought in 2017, Rome was forced to limit consumption of water to 8 hours a day, and cut water pressure to residents by up to 50% (Horowitz, 2017). As the pressure of climate change intensifies, the Apennines see less snowfall each year and the temperature of the urban basin continues to increase.

Additionally, 50% of Italy’s freshwater resources are used for agricultural irrigation, the majority of which produces grain corn, rice, and wheat (Bazzani et al., 2004). In addition to the chemical pollution of Rome’s groundwater with agricultural fertilizer, the extensive use of groundwater in the hottest months of the year places immense pressure on the aquifers that make up the city’s freshwater supply. To make matters worse, the conventional cultivation of annual grain crops using tillage depletes the soil of its organic matter, which is directly linked to its hydric capacity– its ability to store and retain water available for plant use. The depletion of this capacity catalyzes a feedback loop, as more soil is exposed, tilled, and cultivated for plants, the less water is available for them, and more irrigation is needed for crops to mature.

The relation of the city of Rome to its periphery has been historically marked by the delimitation of the Ager Romanus, a vast belt of lands surrounding the urbs, allocated mainly for food production, and politically considered the extension of the city.

Nowadays, around 15 kilometers away from the historical center of Rome, the beltway Gran Raccordo Anulare traces what could be considered as the limit of the city. However, on both sides of this designed boundary the dichotomy is hazy. The speed barrier transversally crosses the other systems of the city, most of the time at the ground level, fragmenting a system of patches of diverse land uses whose integrity seldom prevail over the beltway. One of these junctions can be found at its southeastern stretch where the continuity of the ancient roman roadway Appia Antica forced the highway underground, which conserved the archeological traces on the surface and retained the continuity of the adjacent agricultural plots. This creates a finger of L’Agro that reaches the densest part of the city in the shape of the agricultural and archeological park of Caffarella.

Taken together, these overlapping systems of transportation, recreational parks, and urban development make up the surface patchwork of the current southeastern Agro Romano, whose particular hydrogeological condition over the aquifer means that this peripheral area is key to the future of Rome.

In the last quarter of the XX century, the urbanization of L’Agro Romano transformed more than 200 km2 of agricultural land into both industrial and residential areas with a high percentage of impervious surface, diminishing the infiltration of water into the aquifer and, thus, its availability for the supply of the region. In the decade of the 70’s, already immersed in this process of growth, the foreseeable uncontrolled pace of expansion motivated the appearance of different social movements for the defense of the proximity between the agro and the city. Groups of young people without any background in agriculture, participants in the students’ riots in 1968 in Rome, occupied several abandoned farms from public property in the periphery. They had two main goals: first to find an alternative livelihood to their professions; and, second, as a way of protecting these lands from the immediate expansion of the city that over time would push farther and farther the space for food production. This example provides an alternative narrative for the industrializing periphery of the city, asking; is it possible to hybridize the city’s expansion with a regenerative approach towards urban land? 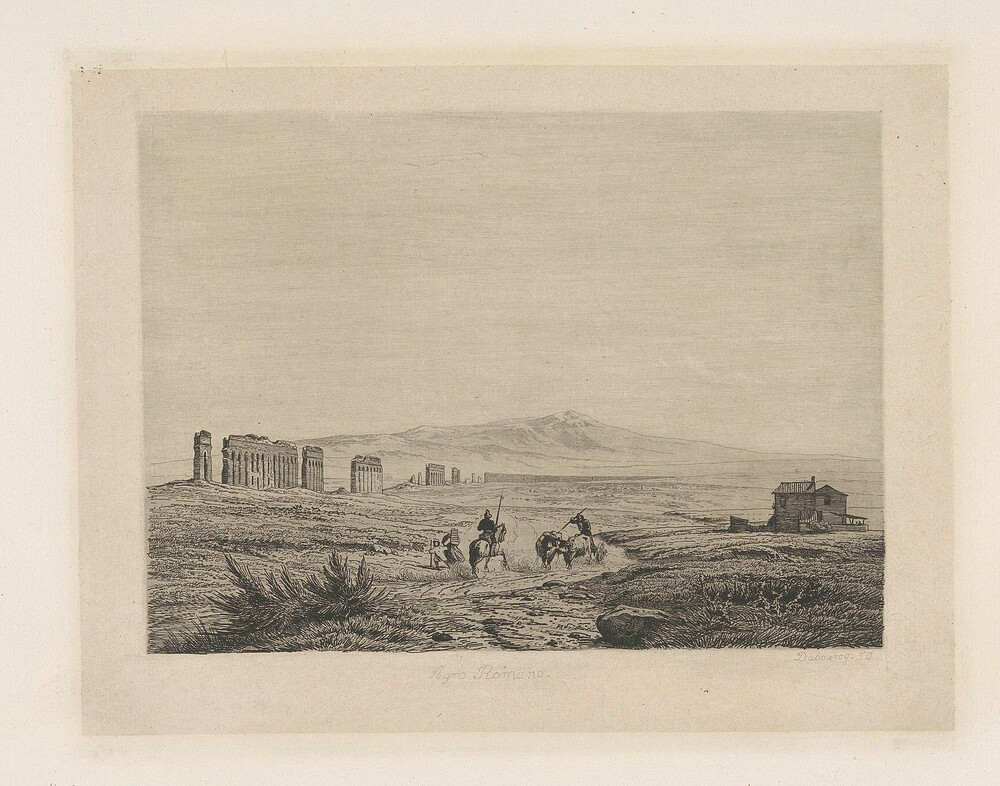 A New Approach to the Waters of Roman Soils

Rome’s identity is connected to its food, and the water needed to produce it. How will that identity evolve in the face of increasing water scarcity? In this studio, we ask you to propose alternatives to the existing extractive land use pattern by designing land management practices that respond to the particularities of the Roman climate, topography, and soil. On top of a close reading of the Roman environment, these proposals will integrate with, build on, and transform the urban systems of Rome’s constructed landscape, while being inspired and influenced by Roman culture: its cuisine, its people, and its history. Through the use of traditional and contemporary regenerative practices that pay close attention to the logics of living systems, the students will propose rule-based design strategies for integrating these techniques into the city, creating new kinds of urban relationships and spaces that collectively transform the urban fabric of Rome. The integration of thoughtfully designed regenerative strategies into Rome’s peri-urban condition will increase the capacity of soils for water and microbial life exactly where it is most needed. By cumulatively augmenting the hydric capacity of L’ Agro Romano’s highly porous substrate, these systems can contribute to aquifer recharge and increase resilience for Rome in the coming decades of water scarcity.

Through regenerative practices of landscape management that produce productive, beautiful, and complex urban spaces, Rome can enter a new era in the long conversation with its periphery and L’Agro Romano in the 21st Century.