This lecture in the Cartographies of Living Systems course describes the history of supplying water to the city of Rome. By looking at the geological and topographical conditions of the region, the logic of ancient Roman water infrastructure becomes clear. This infrastructural system connects to the region’s geology and climate, and this intelligence means that people have been able to modify the system over thousands of years to adapt to new conditions. 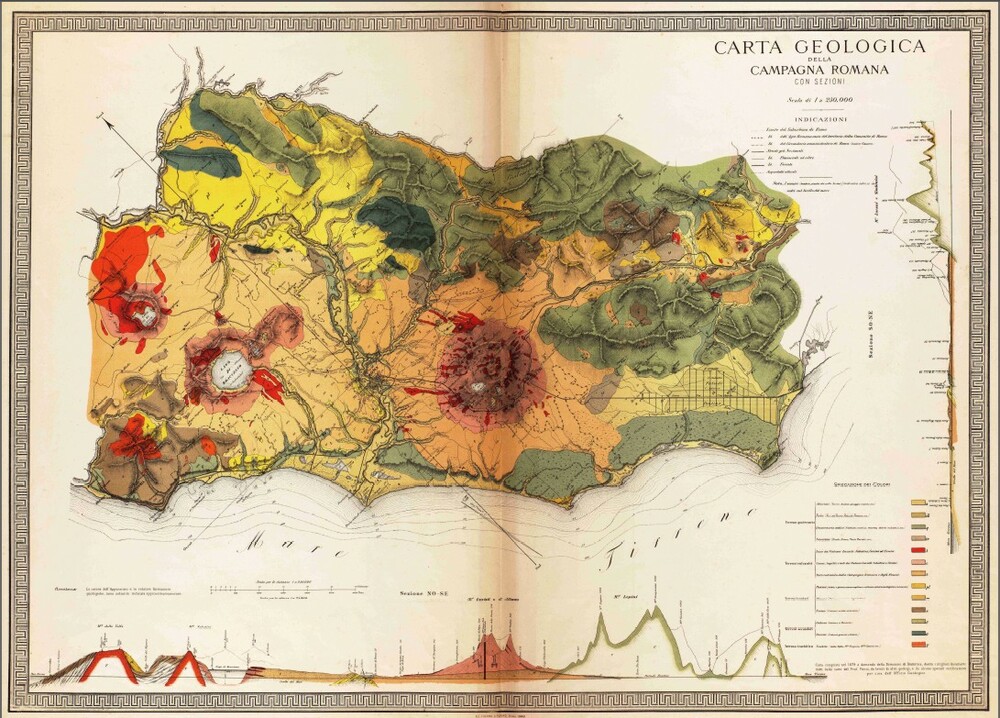 Rome lies at the base of the Tiber river watershed between two volcanoes. The Tiber river defined the urbanization scheme of the city and it flows across the volcanic and igneous rock substrate of the Roman territory. When looking at the section, we see that the majority of the settlement occurs in the river’s floodplain. This area floods during months of increased precipitation after the summer drought. The erosion of the volcanic plateau created, on one hand, the marshy floodplain and on the other, the seven hills of Rome.

Springs that once supplied the city with fresh water occur along the Tiber’s tributary channels. These springs receive their water from the aquifers below the city, each aquifer with a distinct elevation and water quality. The low elevation of the water table means that the springs could not provide water to the hills, which, due to the flooding of the Tiber in the lowlands, were a desirable place to settle. This topographic condition of Rome created the need for the large-scale water supply infrastructure to bring water to the higher parts of the city. 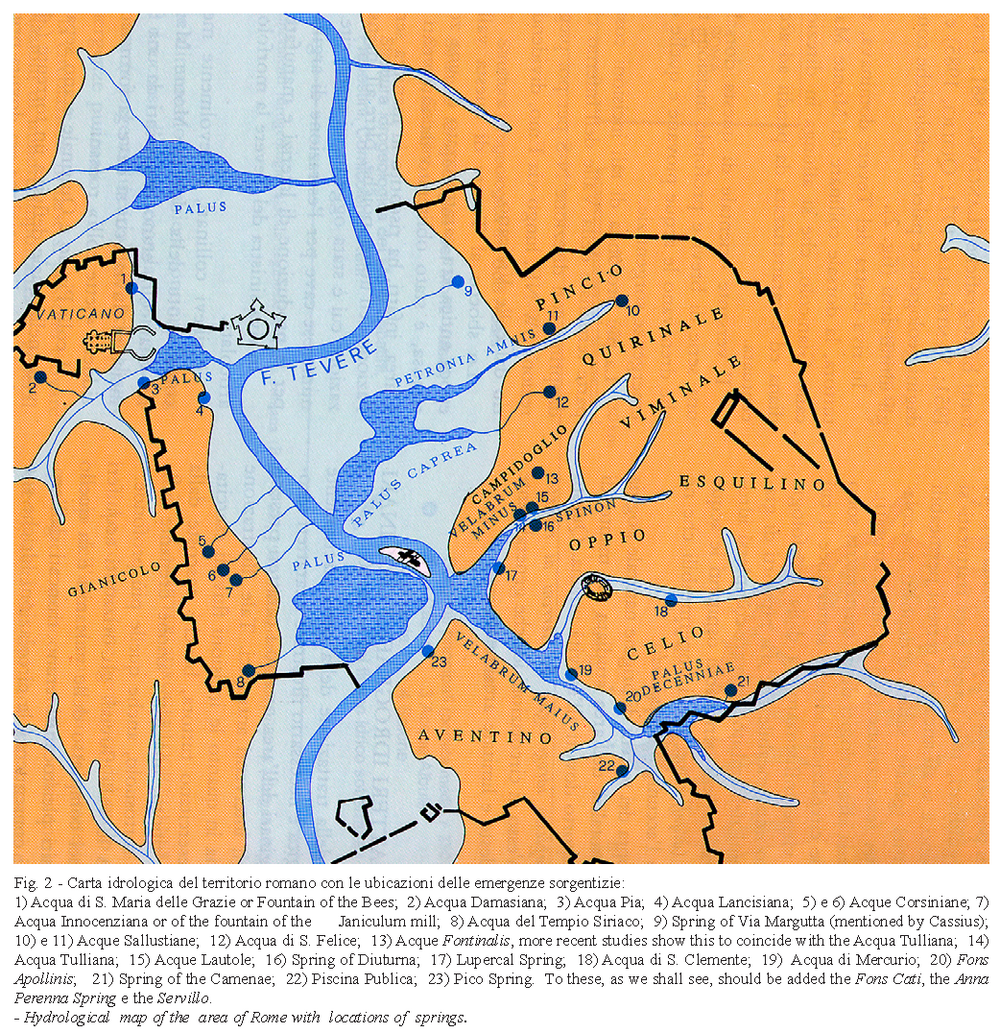 Hydrological map of the area of Rome with location of springs, L. Lombardi

However, analyzing the territory around the city, there are many areas with fresh water resources located above the highest hills in Rome. For example, the carbonate rocks that primarily make up the foothills of the Apennines Mountains to the east, combined with the rain-shadow made by the mountains, create a condition of plentiful, high-quality groundwater. Topographically, this water is higher than Rome. The intelligence of the ancient Roman water supply system consists of recognizing this condition, which is rooted in the geologic and climatic condition of the territory. Over 500 years starting in 300 BC, the ancient Romans constructed a water supply system that was linked to these conditions of the landscape. The network of above and belowground aqueducts transported water from the surrounding territory to the city along a consistent slope. The elevation of the source and the topography of the area determined the areas of Rome that the water would reach. Although they share a topographic logic, each aqueduct collected water from its own watershed, which determined the quantity and quality of water, and each has its own history.

For example, Marcus Agrippa constructed the Aqua Virgo in the reign of Emperor Augustus to supply the Baths of Agrippa. The source of the water was a marshy area outside of the city in Salone to the east of the city, which is at 26 meters above the sea level. The Aqua Virgo travels 20.5 kilometers, mostly belowground, to its terminus in the north of Rome, which is at 18m above sea level. 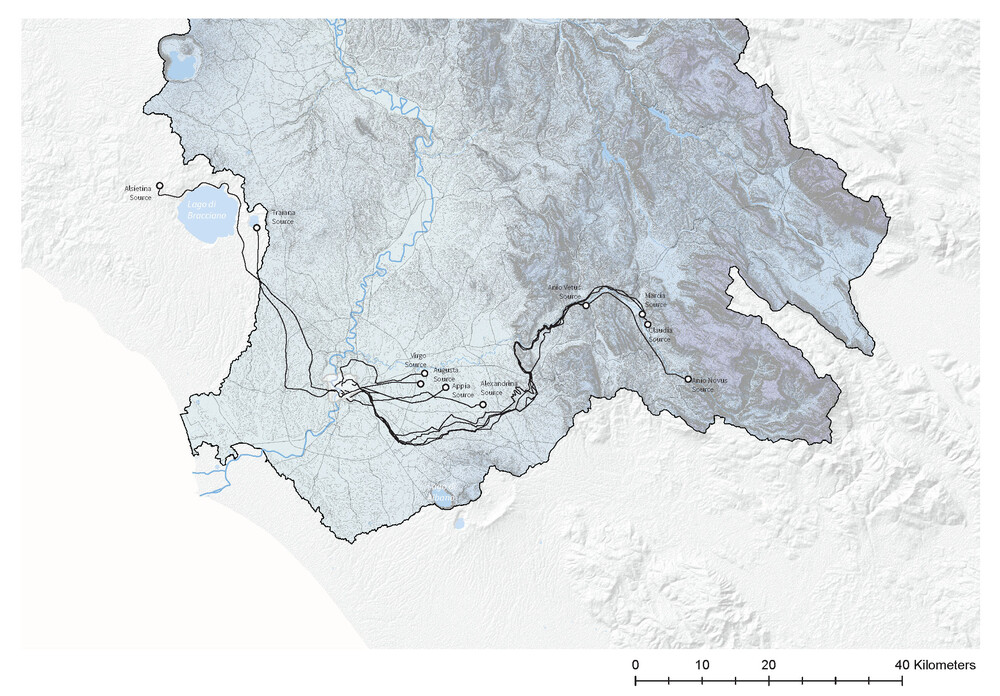 When the Roman Empire fell, many of the aqueducts were no longer maintained and their location forgotten. In fact, at the beginning of the Renaissance, the Aqua Virgo was the only aqueduct that was still supplying the city with water. However, the supply was no longer consistent and not very clean. Pope Nicholas V commissioned an investigation into the route and source of the Aqua Virgo, which led to its repair and rechristening as the Acqua Vergine in 1453. The water from the repaired aqueduct irrigated the gardens of wealthy Roman families along its route and supplied public fountains, such as the Trevi fountain, thus displaying the power of the ruling class and linking the current elites to ancient Rome. The aqueduct continues to supply the Trevi fountain today, but it also brings some of the purest drinking water to small fountains around the city, like Il Babuino (The Baboon) in Via del Babuino. In this way, an infrastructure to supply water to the baths of an Emperor more than 2000 years ago has been adapted and modified while retaining a logic that is embedded in the topography, geology and climate of the place.

For more information about the recovery of the aqueducts in the Renaissance, see Katherine Wentworth Rinne’s amazing book The Waters of Rome